A Charming Town in California

Hollister is located in California’s Central Coast region, between the Gavilan and Diablo Ranges and the Santa Cruz Mountains.  Hollister has a moderate temperate climate. Because of the cool ocean air from the Monterey Bay and the geographical distribution of the two coastal ranges, this results in warm summers and mild winters.

Hollister was named after Colonel Hollister, who drove his sheep across country to settle in the area where he received a grant called the San Justo Grant. In 1872 it was then decided to call the community Hollister when they decided there were too many towns named after Saints in California! Hollister has the charm of a small town with scenic rolling hillsides, mustard filled apricot orchards, and cattle grazing the land. There are many artists that live in Hollister who paint, draw, and take photographs. Because Hollister has a history of farming and cattle ranching ambiance, there are many stunning landscapes for artists. The Diablo Range has different shades of color and light during the various seasons of the year.

Mustard grows profusely in an apricot orchard in Hollister, below. 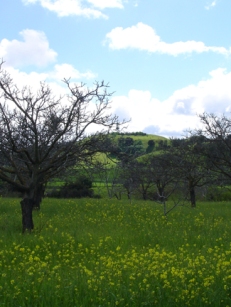 The sunsets and sunrises in Hollister, California are full of beautiful color during various seasons. Many times one can think the sky is on fire just by looking at the sunset after an autumn rain. The light purple shade along the Diablo Range against the dark green shadows would fool one into thinking they are looking at a watercolor painting. The close proximity to the Monterey Bay give this town a cooling off period most evenings. Most out-of-towners don’t realize these things about Hollister. You would have to live here to see it for yourself! 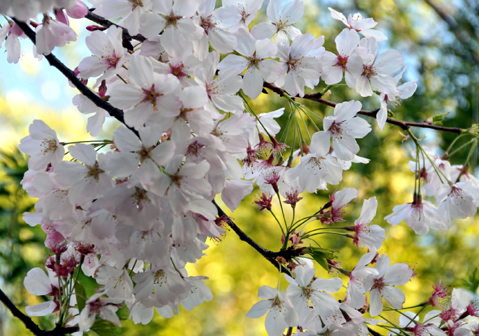 Garden Glo Flower Art is a garden of floral artwork inspiration, from modern to vintage, with beautiful flower photo and graphic art designs, vintage flower paintings, and scenic postcard landscapes. Flowers and gardens have long been a way for artists, from long ago to modern times, to learn about light and color. As the time of the day changes so does the light that glows on the flower.